For the first time we find a Lord of Montcavrel in a text of 1071. Foulques seems to be the head of the Montcavrel family. After him comes Enguerran I, one of the great Lords of the Court of Boulogne.

The Montcavrel family finally disappeared on the battlefield of Agincourt (October 25, 1415) with the two brothers Jean and Rasse de Montcavrel. Through marriage, the seigniory was attributed to Aymon de Monchy who restored the château after it was devastated by the English. He also led the construction of the church of Emy, that later became the village of Montcavrel.

Later, Antoine de Monchy (1569-1587) repaired the damage caused to the château and removed the fortifications that were no longer necessary. The Monchy were rich and powerful lords, but successive wars caused their ruin. Between 1561 and 1566, their seignory was confiscated. Jean-Baptiste de Monchy, who died in 1690, finally sold his marquisate to his brother-in-law Louis-Charles de Mailly. The Mailly didn't live in Montcavrel as they belonged to the nobility at court. However, Louis III de Mailly (1708-1764) welcomed in his feudal residence the Tsar Pierre Le Grand during his stay in France.

Later, Louis III's debts increased and he finally lost his fortune. His two last successors, Louis IV de Mailly (1764-1767) and Louis-Joseph-Auguste de Mailly (1767-1810). After her marriage to Prince Pie-Auguste de Bavière, Louis-Joseph de Mailly's granddaughter (Louis-Joseph de Mailly had been Lord of Montcavrel) bore the Duke Maximilien-Joseph de Bavière (December 4, 1808). On September 9, 1829, he married Louise Wilhelmine, the royal princess of Bavaria. They had eight children, one of them was the Duchess Elisabeth (born on December 24, 1837). She became Empress of Austria and was know as "Sissi". In the meantime, during the French Revolution, the castle was looted, the coats of arms and archives were destroyed. On April 10, 1795, the castle was sold to Antoine Bourdrelle, the former farmer'son to the castle. In 1813, a few walls were destroyed. With the materials, a new central building was constructed in 1842. For eighteen years, Montcavrel had been one of the National Sheepfolds created by king Louis-Philippe. Between 1862 and 1931, it was owned by the Minet family. Sold many times, it was badly treated by some of its Owners. But today, the château is being restored.

Page 11 from this book: On the right top corner one of the stables of our fermette 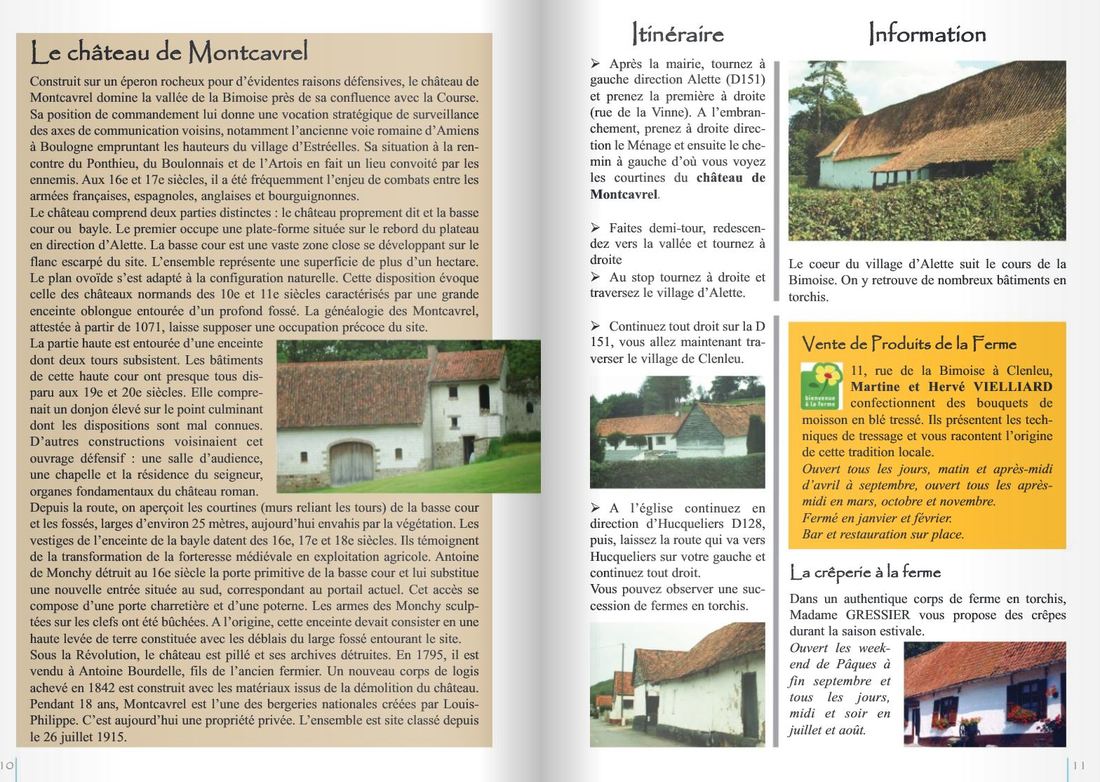